It's been a LONG time since I did any blogging, around 5 months, and lots has happened in that time. Summer fun, The Wee One started school and our wee baby arrive, so I am hoping to write a few catch up posts.

The last post I wrote was about being 28 weeks pregnant. Well, here we are five months later and I am sitting writing this post while breastfeeding my beautiful son! The story about how he came into the world isn't as straightforward as we had planned:

As with my first child, The Wee One, my due date came, and my due date went again, without so much as a niggle. Discussions with my midwife were the usual "wait and see" and if nothing happened I'd be booked in for induction. At every appointment she'd examined me and determined that the baby was definitely head down and that it would just be a matter of time. I was extremely uncomfortable; something (a bum? Legs?) was lodged under my rib cage, which made it difficult to get comfortable in any position and the only way to ease it was to sit with my right arm stretched in the air! Not my best look.

Another week went by, and still no sign of baby. So we made plans to be induced. I was quite alright with this, as I'd had to be induced with The Wee One, so I knew what to expect. We were booked in at 40+12.

On the day, my mum came to babysit the The Wee One and Hubby and I made our way to the hospital. I got settled in. The ward was quiet, I had a 4-bed room all to myself! The midwife came and clerked me in, and did all her routine examinations. She explained everything very clearly, which I liked as I felt the last time I didn't have a clue what was going on. She got all set up to start induction, and gave me a thorough examination. Then she said she was just away to get one of the doctors to double check something. No worries, I said, thinking this was routine.

Doctor came, with a colleague in tow, and she had a very good feel at my belly. Then she said she just wanted to get the scanner, because the midwife had an inkling that the baby was breech and she felt so too! I was not expecting that at all, after all, my community midwife had said for weeks that the baby was firmly head down.

But no, there, on the scanner was a wee face peeking out from underneath the right side of my rib cage! My heart sank. This inevitably meant I would have to have a section. Now, I had always wanted to avoid a section, so much so that I had written it in my birth plan. I was so upset.

The consultant came to chat with us and gave us three options: try a breech birth (NO WAY), go home and come back in 2 days for a planned section, or try and turn the baby in theatre the next morning and if that didn't work have an emergency section. I was already in hospital, and super overdue, no way was I going home. I was hopeful that they would be able to turn the baby in theatre and I'd have a proper labour so opted for that. The lovely anaesthetist came to explain his role to us, and he basically said "they'll try to turn the baby, but it won't work so here's what I'll do". He was very realistic and made sure I had every bit of information I needed.

So Hubby went home, and I tried to get a sleep. I was still hopeful they would be able to turn the baby.

The next day, we went to theatre, where we met Katie the midwife who would be with us all the way through. I think Hubby had too much fun wearing the scrubs she gave him... but I was glad he was going to be right there through all of it.

The theatre team were all lovely; the consultant, her colleague, the three nurses, one of whom sounded SO like my boss it was a little bit weird, and the anaesthetist. He was always right at the top of my head talking me through everything.

I was hooked up to the drip and given some medication to relax my uterus for them to try and turn the baby. I was given an epidural and then after that, I couldn't feel below my waist. Until they started trying to turn the baby. Oh Lordy, I wouldn't wish that pain upon anyone. It's horrific. They tried three times, until I couldn't bear it any more and they stopped. A section it would be. I remember starting to cry hard at that point. I didn't want it to be this way. The anaesthetist said it would feel like someone washing dishes in my belly for about 30 seconds and that it would take longer for them to stitch up. And he was right. About a minute later they held up my beautiful baby boy (bits first, just in case I was in any doubt) and within a couple more he was on my chest and we were having cuddles. And all the anguish about having a section went away. He was gorgeous! 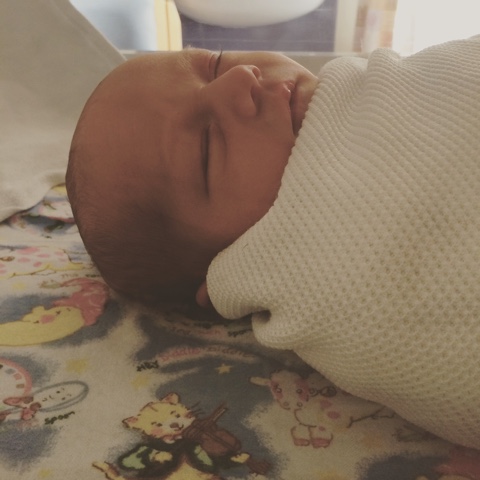 So please welcome our newest addition to the family, who will hereby be referred to as The Boy